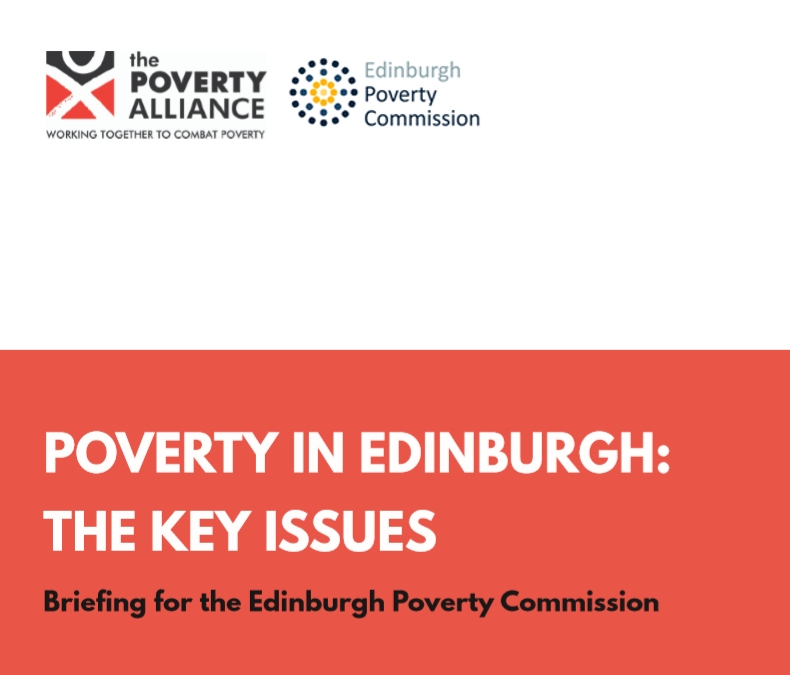 People living on low incomes in Edinburgh have decried the city’s high living costs and called for increased action to loosen the grip of poverty in their lives, in a new report published today.

New research undertaken by the Poverty Alliance on behalf of the Edinburgh Poverty Commission has revealed the range of challenges faced by people struggling financially in Edinburgh, with high housing and living costs combining with low-paid work and benefit issues to lock them into poverty.

Many participants were struggling to afford day-to-day basics like food, transport and households bills due to a combination of low incomes and high living costs in the city. As a result, people are being forced to rely on foodbanks and on friends and family.

The research revealed problems with the social rented housing system in Edinburgh, including a lack of adequate, available housing and long-term stays in inadequate temporary accommodation, which were having a significant impact on people’s lives.

Many participants felt displaced from Edinburgh city centre and had a perception that those with power valued tourism over the needs of local residents living on low incomes.

There were also major challenges faced by people seeking advice and support, with many either not knowing where to access this support or being faced with long waits for appointments at advice services.

Research participants shared their solutions to Edinburgh’s challenges. The need to recognise the higher cost of living in Edinburgh was the dominant theme, with solutions including greater action on housing (including more socially-rented properties and action to reduce private rents), more affordable transport, and more action to improve people’s awareness of their social security entitlements.

One participant in the research said:

“I’ve always believed that it’s very expensive to live and work in Edinburgh. Many people commute into Edinburgh because it’s cheaper to live out with Edinburgh. But, you know, some of us ‘Edinburghers’ don’t want forced out of the city, we want to live in the city and I’ve always thought that Edinburgh should be treated a little bit like London is with a higher salary scale to incorporate the cost of living in the city centre.” (Edinburgh city resident)

“It cannot be right that, on the eve of a new decade, one in five children in our wealthy capital city are living in poverty. This timely report shows the problem to be damaging, costly and spread across the city. Poverty can be solved if we involve people with first-hand experience. City-wide, further action to boost affordable housing and cut the cost of travel needs to be backed by employers offering a living wage and secure hours. Easy access to quality advice on money, debt, housing and care should be available to every neighbourhood. We can start to solve poverty by stopping the ‘pillar to post’ experience that too many citizens struggle with.”

“At this time of year, more than ever, we need to consider those less fortunate than ourselves. Most of us will be downing tools and enjoying food, fun and games with family and friends but the stark reality is that there are too many people who still don’t have enough money to meet their basic needs over the festive season, let alone all the trimmings that come with it.

The research published today is a startling reminder of this. The result of focus groups carried out with people who are actually experiencing poverty in Edinburgh today, it spells out their personal experiences, providing a valuable platform for setting policies and improving people’s lives in the future.”

Since the Edinburgh Poverty Commission was established in November 2018, three calls for evidence have received over 120 written responses, and forty face to face evidence sessions have been held. Today, in addition to launching the new report, the Edinburgh Poverty Commission has launched an online survey to find out what the people who live and work in Edinburgh think about solving poverty in their city.

The survey is open to everyone who works and lives in the city of Edinburgh, and aims to be the largest ever public consultation about poverty in the city.

The survey will remain open until Friday 11th January 2020 and can be accessed here.

Full report can be accessed here.