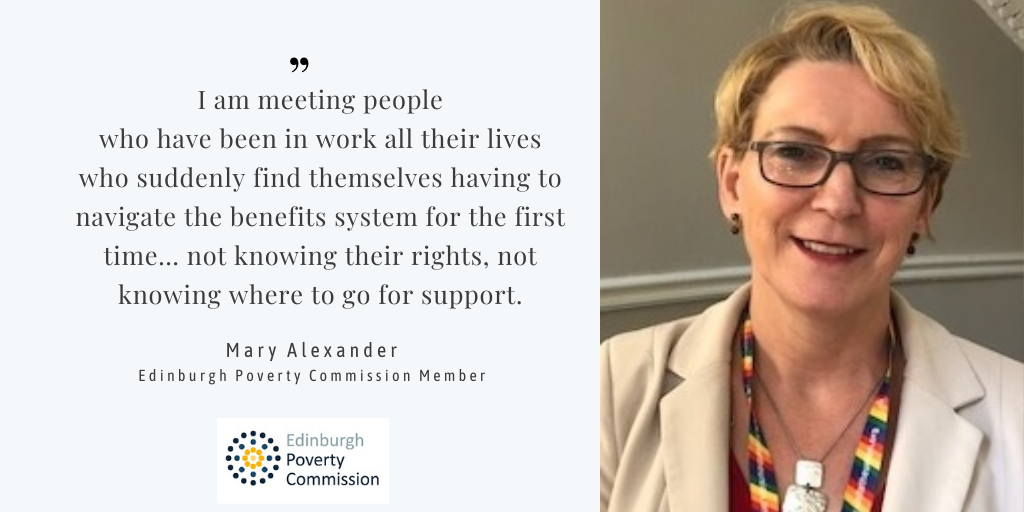 In the latest in our series of blogs, Commissioner Mary Alexander welcomes the value of our essential workers being recognised.

The interim findings of the Edinburgh Poverty Commission have highlighted the good, the bad and the downright ugly side of COVID-19. Our hearts go out to the many families who have lost a loved one to the pandemic which has swept through Scotland and beyond. It has touched everyone in some way with illness, mortality and increased poverty, clear markers of the pandemic in our communities. Alongside this darkness, a light has been shone on the fundamentals in our society. There has been a positive flourishing of humanity as local communities came together to support each other in mutual aid and at long last there is recognition of the value of our essential workers in health and social care, refuse collectors, delivery drivers and Lothian bus drivers – all of which offers the opportunity of a fundamental rethink of the way we do business, and the way we live and work in twenty-first century Scotland.

The way people work is likely to change with more flexible and homebased work becoming widespread. There will be less demand for office space, but we should be cautious about this. Homeworking can lead to isolation with evidence suggesting loneliness is more dangerous than obesity and more damaging to health than smoking 15 cigarettes a day.

In Edinburgh, the city is in crisis as thousands of people have lost their job and thousands more are at risk of redundancy. Job vacancies in Edinburgh are down by 60% between March and June – the third biggest drop in Scotland and Edinburgh has seen the fastest growth rate for unemployment benefit claimants in Scotland.  According to HMRC, 628,000 workers have been furloughed across Scotland with Edinburgh, Fife, Glasgow and Lanarkshire – among the worst affected council areas. Whilst the UK government’s Job Retention Scheme (JRS) is laudable and has provided a lifeline for many businesses and workers, the longer COVID-19 remains prevalent, the more precarious the prospects are for businesses and the job security of Scottish workers.

In the last week, Edinburgh Airport has announced hundreds of job losses in airline and support services. In addition, there has been a major problem for workers initially out with the scope of the JRS such as construction workers on exploitative umbrella contracts or taxi drivers whose livelihood was taken away in one fell swoop. Many are navigating their way through the tortuous process for claiming Universal Credit for the first time or applying to the Scottish Welfare Fund for a crisis grant. The hospitality and aviation sector upon which Edinburgh thrives has been placed on life support with the streets of the once bustling and joyous city strangely empty. These are likely to be viable businesses when the economy recovers, but it may take a long time. The virus has shone a light on unfair work practices such as zero-hours contracts and bogus self-employment and exposed a need to rethink employment practices and introduce a Fair Work agenda, as promoted by the Scottish Government. Behind this collapse in livelihoods lie some truly heart-breaking stories of families thrown into severe financial difficulty. Particularly difficult is the number of employers who are taking people off furlough and making them redundant, which appears to be a growing trend if BA is anything to go by. There are in addition companies who inexplicably choose not to furlough their workers.

As a trade union official for Unite the Union working in Edinburgh, I have witnessed our office overwhelmed with demands for advice and information on individual and collective rights and the responsibilities of employers throughout the pandemic. It is incumbent on us all to work together to ensure serious long-term action is taken to protect jobs and incomes as they are doing across the Channel with two years support to help workers and businesses get up and running again.  It’s a mistake to end furlough for key sectors of the economy struggling to recover going into the winter and the Chancellor’s recent announcement of a £1,000 job retention bonus falls somewhat short of the long term action needed to support our strategic industries.