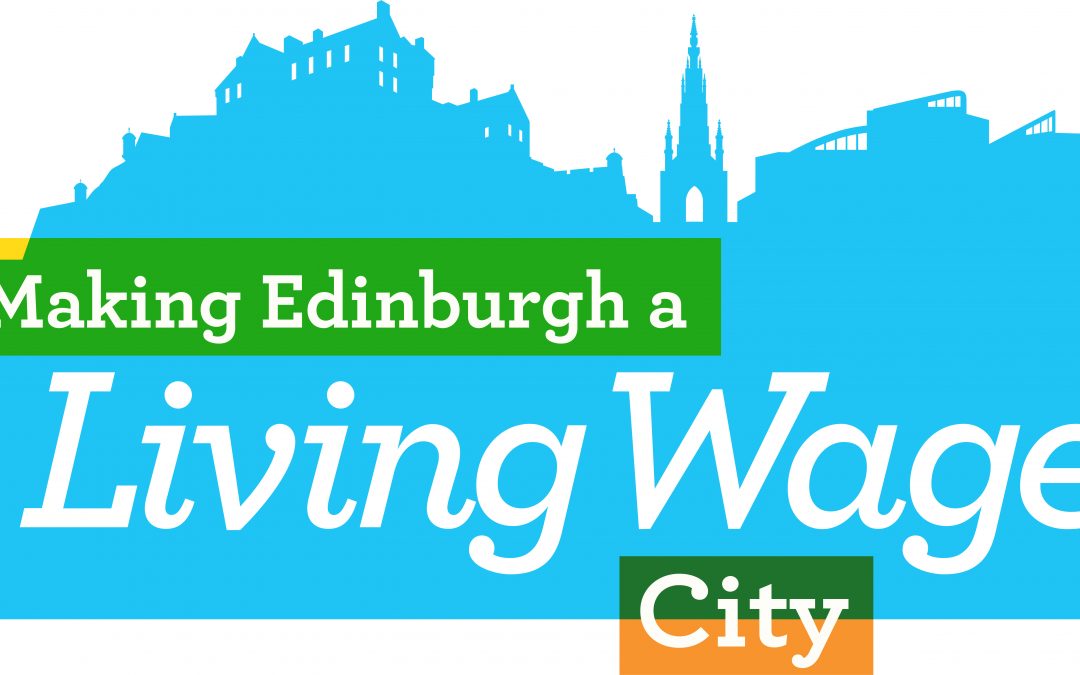 Back in September 2020, when we published our final report, A Just Capital, we called on Edinburgh’s employers, Trade Unions, social enterprises, and public sector bodies to come together in a new alliance to make Edinburgh a Living Wage City.

Today (16 November) on Living Wage week, we are delighted to report that Edinburgh is celebrating its new status as a Living Wage City. Edinburgh Poverty Commission welcomes this vision and accreditation being realised and congratulates all city partners involved.

The accreditation has been awarded by Living Wage Scotland in recognition of the Scottish Capital’s ambition to deliver on its new Edinburgh Living Wage City action plan and double the number of Living Wage accredited businesses to over 900 across the city over the next few years.

Around 450 Edinburgh businesses are already committed to voluntarily paying their staff the Living Wage, paying a minimum hourly wage of £9.90 per hour. This new Living Wage rate was announced yesterday (Monday 15 November) as part of Living Wage Week 2021.

Now through the action plan – developed by the Edinburgh Living Wage Action Group, a collaboration of employers, public sector bodies, trade unions, social enterprises, and business organisations, supported by key city anchor institutions including the City of Edinburgh Council and the Edinburgh Partnership – the aim is to see at least 500 new accredited businesses.

It is expected that this will mean up to 40,000 workers in Edinburgh are protected by Living Wage commitments from their employers. Of those, at least 10,000 will be workers who receive a direct pay increase as a result of this commitment.

The commitment to becoming a Living Wage City arises from the calls to action made by the Edinburgh Poverty Commission report. To pay a fair wage is one key aspect of eradicating poverty across the Capital.

Last year, the City of Edinburgh Council became the first UK local authority to commit to ending poverty by a specific date – by 2030. Tackling poverty in Edinburgh remains one of the Council’s key priorities to making sure everyone can take advantage of everything the Capital has to offer and is paid a fair day’s pay for a fair day’s work.

“Being an accredited living wage employer is about so much more than paying a Living Wage. It’s about embedding a culture of Fair Work and giving staff financial security, showing them that they’re truly valued for the contribution they make. And the benefits for employers include being able to keep and attract skilled staff – something many businesses are struggling with right now.

“So, we’re asking all businesses and organisations across the city to join us. Together, we can make our city fairer and make sure everyone shares in our economic recovery.”

The City of Edinburgh Council’s Fair Work Vice Convener, Councillor Mandy Watt, said:
“In-work poverty needs to end – and Edinburgh is taking a welcome step towards that today by becoming a real Living Wage City. Fair pay, fair hours and respect at work should be something that all workers can expect from their job. We’re hoping that a huge number of Edinburgh employers share our ambition and will raise wages to the level of the real Living Wage, which was announced yesterday (15 November). Once that’s done, they can move forward to full accreditation and show everybody that they’re helping to end poverty in our city.”

The Scottish Government’s Minister for Just Transition, Employment and Fair Work Richard Lochhead said:
“I am pleased to see Edinburgh achieve the significant milestone of becoming a Living Wage City. There is increasing evidence demonstrating the benefits of Fair Work to both workers and business and by promoting the real Living Wage, the Edinburgh Action Group recognises the importance that fair pay has on the local economy.

“I congratulate the Action Group and all the employers in Edinburgh that have played a part in this important achievement.”

Lindsay Fyffe-Jardine, CEO at Edinburgh Dog and Cat Home, said:
“We are very proud to part of a business community that recognises the importance of providing the Living Wage to their staff, and what an impact this has on both their income and wellbeing. At Edinburgh Dog and Cat Home, happy people always means happy animals, and through our commitment to the living wage, we are reducing financial pressures that our staff might otherwise face, ensuring the highest standard of care for our dogs and cats.”

Peter Kelly, Director of The Poverty Alliance said:
“Today’s announcement that Edinburgh has been awarded ‘Making Living Wage Places’ recognition sends a strong signal of the determination to end low pay and loosen the grip of in-work poverty for workers and their families in Scotland’s capital city.

“The commitment by this alliance of employers to the people of Edinburgh is very important, and we look forward to working with them on making Edinburgh a Living Wage city. We want to see towns and cities in Scotland come together to tackle in-work poverty, and this is a significant step on that journey.”

Christine McCaig, Projects Coordinator and Living Wage Scotland said:
“This Living Wage Week, we are delighted to announce the launch of an ambitious action plan to ‘Make Edinburgh a Living Wage City’. There are now more than 2400 accredited Living Wage employers in Scotland, over 450 of which are based in Edinburgh, who together want to ensure workers have what they need to thrive.

“The impact of the real Living Wage in tackling in-work poverty is strengthened by a collective effort from local employers, anchor institutions, key stakeholders and communities working together. We hope to see many more employers in Edinburgh become accredited to drive the vision of Making Edinburgh a Living Wage City.”

Since 2011 the Living Wage movement has delivered a pay rise to over 52,000 people in Scotland and put over £310 million extra into the pockets of low paid workers in Scotland.

What about the Government’s national living wage?

In July 2015 the Chancellor of the Exchequer announced that the UK Government would introduce a compulsory ‘national living wage’. It was introduced in April 2016, originally applying for all workers over the age of 25, and, as of April 2021, is currently £8.91 an hour and applies for workers over the age of 23. The rate is due to increase to £9.50 per hour in April 2022. The national living wage rate is different to the Living Wage rates calculated by the Living Wage Foundation. The government rate is based on median earnings while the Living Wage Foundation rates are calculated according to the cost of living in London and the UK.

About the real Living Wage The real Living Wage is the only rate calculated according to what people need to make ends meet. It provides a voluntary benchmark for employers that choose to ensure their staff earn a wage that meets the costs and pressures they face in their everyday lives.

The rates are calculated annually by the Resolution Foundation and overseen by the Living Wage Commission, based on the best available evidence on living standards in London and the UK.

The Living Wage Foundation is the organisation at the heart of the UK movement of businesses, organisations and individuals who campaign for the simple idea that a hard day’s work deserves a fair day’s pay.

Living Wage Scotland was established in April 2014 by the Poverty Alliance with the aim of increasing the number of employers in Scotland who are recognised for paying their staff the real Living Wage.

Living Wage Scotland is a partnership with the Living Wage Foundation and is funded by the Scottish Government.

The Poverty Alliance is the national anti-poverty network in Scotland with a long track record in working with individuals and communities affected by poverty to take action, and in providing support to influence policies solutions in Scotland.

Accredited Living Wage employers in Scotland span private, public and third sectors. SMEs make up 75% of the total number of employers and more than half of Scotland’s local councils are accredited. Find out more at www.scottishlivingwage.org/accredited